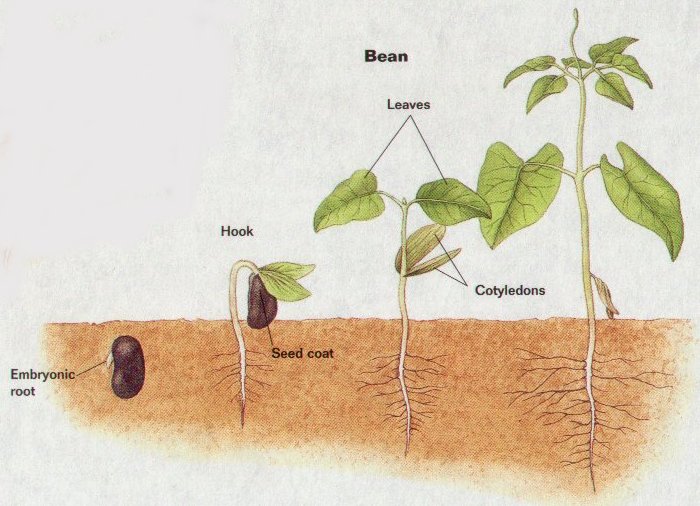 GROWTH AND DEVELOPMENT IN FLOWERING PLANTS

THERE are two types of seed germination namely hypogeal ger­mination and epigeal germination.

The part of the embryo that elongates is the epicotyl. The epicotyl elongates rapidly raising the plumule above the soil while the cotyledons remain below the underground level.

Food stored in the cotyledons is used for respiration by the cells and for new tissue formation.

The shoot is pushed through the soil particles. In maize the plumule sheath known as coleoptiles pro­tects the plumule. The coleoptile grows towards the light. The foliage leaves emerge through the split end of the coleoptile, it carries out photosynthesis, while the radicle as it emerges through the maize grain by a sheath called coleorhiza.

In a dicotyledonous seed, the plumule and radicle are attached to the two cotyledons. The hypocotyl elon­gates rapidly raising the cotyledons into the air. The hypocotyl is the region of the stem beneath the cotyle­dons and di­rectly above the young root of a seedling.

The epicotyl is the region of the shoot of a seed­ling which is found above the cotyledon of the embryo.

The seed absorbs water and softens the testa, the cotyledons wall swell and rupture the testa. That process makes a radicle to elongate and emerges through the seed coat. A root develops from the radicle.

The cotyledons enlarge and turn green to carry out photosynthesis. The epicotyl elongates thus increasing the height of the seedling. The first foliage leaves emerge.

The cotyledons shrivel as the stored food materials are used up. The first foliage leaves enlarge and start carry­ing out photosynthesis.

(a). Germination is triggered by the entry of water into the seed through the micropyle. It absorbs from the surrounding areas.

(b). Water softens the testa. The cells become turgid as they take in water .The turgid­ity ruptures the softened testa.

(c). The water dissolves food substances so that they can be transported to the growing parts.

(d). Energy released during respiration is used for growth, it is also needed for making cell walls.

(e). The proteins stored in the seed are broken down into amino acids. Amino acids are an important component in the synthesis of cell membranes and cytoplasm.

(f). The radicle forces its way out of the testa and the plumule elongates and emerges above the ground.